How to increase your closing rate in one easy lesson How to increase your closing rate in one easy lesson

The Power of Silence and the Rule of Three

I know, I know.  Everybody who wants you to read their stuff tells you it’ll make you “close more sales, instantly!”

But this one is really easy, plus this one really works.

It’s one of my favorite techniques to get down to the crux of the matter – in a sales call, a sales meeting, a board meeting, or a relationship discussion with a significant other.

Interested?  Let’s go.  I use this technique when I’m dealing with objections or questions, so I suppose it could be filed under Objections as well, but here we’re going to look at it in terms of:

The Art of Closing – in Two Parts

I say “seemingly” because after all, how difficult is it to just sit there and say – nothing?

That is the power of silence. The Power of Silence is a mind boggling thing.

It’s the same as telling a rookie batter, when you get a count of 3 – 0, you Do Not Swing Your Bat.  You’ll ruin your chance of drawing an easy walk, or you might needlessly hit poorly and get out.  You have a minimum of three more pitches you can look at.

Similarly, If you speak you crash into your prospect’s thinking.  This brings to an early stop the thought train that they’re riding to reach their decision – you’ve just held up your own train.  You’ve blown the deal.

How?  By interupting, you jar them out of their thinking.

They’re likely thinking of how to buy from you, and because of your insecurity – the insecurity caused by the elongated pregnant pause that naturally occurs after a closing question is asked – you open a door they had not previously seen, and let them out.

And they aren’t just out, they’re gone.

Sure, you may feel the emotional pressure in the room elevate after your closing question, but that’s what’s supposed to happen.

You cannot sell in a comfortable environment.

What’s not supposed to happen is you talking first in order to answer your own question and relieve the pressure yourself.

Make sure it’s your prospect who talks first.  Always.

Otherwise, you’ve just spent a lot of time educating a prospect who discovers the easy way out of buying when you crash in on their thinking after your close.

How long do you wait for them to speak first?

After asking a closing question – shut up – and wait a week if you have to, to get your answer.

I don’t remember a lot of details about my first meeting with one of The Bosses of the world’s largest chain of convenience stores.

I don’t remember the size or decor of his office, the floor level, the name of his advertising manager, or the names of his outer office personnel. But this is what I do recall in vivid detail.

This Boss wasn’t looking at me but out his window as he pondered rolling the dice on a brand new ad medium his company had never tried.

I was selling saturation direct mail advertising and his company had only ever done radio.

Just one rung below T.H.E. Boss, he was a decision maker for many thousands of stores across the central U.S.A.

This particular pilot project covered their 1,300 stores throughout the Dallas-Fort Worth metroplex.

He asked, “About how many homes would we target per store, on average?”

Their stores throughout DFW’s fourth-ranked Metropolitan Statistical Area saturated the entire market, and there were several reasons why they would be best served by delivering to all of the 1.3 million available households.

I didn’t make a sound, waited for him to answer his own question.

An hour-long minute later, he guessed, “About a thousand?”

“That’s perfect,” I replied.  “One thousand homes per store times 1,300 stores saturates the full DFW market of 1,300,000 homes. Because it will be a full market buy with your ad going into every zip code, we can assign your eight-page tab to the outside position of the entire bundle we mail that week. What’s great about that is, for convenience, postal carriers often insert the smaller pieces of mail inside larger ones and roll them all together so the whole bundle rolls up and slides easily into the mailbox. Your tab will be on the outside of all the mail in 1.3 million DFW mailboxes that day. It will be the first thing seen in more than a million households when they get their mail.”

Result: All stores completely sold out of many advertised items.

My client Boss was a hero within the corporation, and news spread through their HQ hallways by word of mouth in meetings.  Soon all Boss level execs had me working with their ad teams.

A company that had never used print media advertising became one of our company’s biggest clients nationwide and mailed over 50 million pieces with us each year.

Every campaign averaged 1,000 households per store.

That’s the Power of Silence

Now for the real deal

The Rule of Three

The Rule of Three simply states that when a person is asked a question that makes them uncomfortable, they will tend to avoid getting to their true bottom line answer.  Often because they don’t know what it is.

As a competent professional salesperson it’s your job to help them get there.

“You asked me to show you how our quality is superior, our pricing is lower and our support services are better than our competitor who you saw earlier. And we both agree I’ve done that, right?”

“So let’s get this paperwork out of the way and I can have our Remote Mobile Priority Installation Team jump on your installation right away.”

Your prospect leans back in his chair and says, “Well, I’m not quite ready to pull the trigger just yet.”

Yeah, yeah, yeah.  Typical stall.  What can you do with this?  Nothing.

Nothing, that is, until you really get to the true root of his reluctance, and you’re nowhere near it yet.

Only when you know his true reason for not doing the deal right then, can you effectively deal with it. Otherwise you’re building your case on quicksand.

So what magic words do you utter next?  What cool hip clever cutesy closing line do you employ? 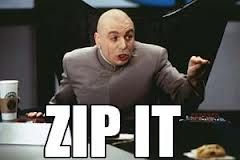 Each time you ask a closing question … Zip It.

This forces your prospect to think further to provide you with another reply.

He says, “Right now, I’m researching our available options so we can make a decision when we meet to review the data.”

Now he has to think again.  His unsuccesful head feints didn’t throw you off.  He leans forward.

“I can’t make this decision myself,” he confesses.  “I have to meet with our CEO.”

You probably say something like, “That sounds like a great idea.  I should be in that meeting as well so we can make the best use of both your time and get all your questions answered and decisions made in one session.  When can we get together?”

Without the Rule of Three, you never get to that true obstacle, you just get distracted with diversionary tactics.

And if you spend all your time and energy chasing diversions, I guarantee you lose.

The Rule of Three

Remember, when asked a question that creates emotional discomfort, a person normally responds in the following fashion:

The first thing they tell you is what they think they want to hear.

“Well, I’m not quite ready to pull the trigger just yet.”

The second thing they tell you is what they think you want to hear.

“Right now, I’m researching our available options so we can make a decision when we meet to review the data.”

The third thing they tell you is the truth.

“I have to meet with our CEO.”

You can deal with this.  When you do it successfully, the deal is yours.

But without employing the Power of Silence combined with the Rule of Three, you might never get there.

This is so easy, it’s easy to make it complicated.

With anything other than a favorable answer, just say, “Mm-Hmm” and Shut Up.

The third answer is the truth.