How to Ground your Helicopter Sales Manager

How to Ground your Helicopter Sales Manager

In sales it can often feel like dancing at the end of marionette strings controlled by Sales Managers.

“How does your pipeline look for next month?”

“I’d like you to role play a sales call with Jack in our sales meeting today.”

“Is that deal coming in soon?”

“Have you heard anything back on that deal?”

“This is just a quick check in call to see how things are looking for sales this month.”  (You mean, since yesterday?)

“You’ll need to increase your sales by about 5% per month from now until the end of the year.  How are you going to do that?”

The most intensive, most taxing, most fun job I ever had was as sales manager.  Three times, in three companies.  I loved working with my team and my reps.

It was fun to help figure out strategies, tactics, make decisions, and go out in the field to make joint sales calls.

Joint sales calls were fun because my years of actual face to face selling experience played a role in advancing the incomes and careers of my team members.

I’ve had several sales managers during my 40 year selling career who I loved to have on sales calls with me.  They were sharp, they were good, they knew how to do the deal.

Then I had a couple of sales managers who nobody on either respective sales team wanted to have go out with them.

We called him E.B. because he proclaimed himself out loud as an Empire Builder.  A 5′ 7″ empire builder.

E.B. was not alone in referring to himself as an empire builder …

In one of the mysteries of business, E.B. somehow got hired as the district manager for a new adverstising company with its own in-house sales force.

I wanted him along on a sales call as much as I wanted to carry a rattlesnake in my briefcase.

E.B. muscled his way into joint calls with all of our reps at one time or another. It was amazing how often deals got closed because he was on those calls.  According to him.

Those who directly reported to him had no choice in the matter of his intrusive help.  We who reported to a different sales manager were able to outwit these unwanted impositions to a great extent.

But after I became consistently successful in my sales job, E.B. wanted to go on a call with me.  Probably so he could take credit if the deal came through.

We agreed on an appintment I had with a new prospect that fit into E.B.’s schedule.

The day of the meeting arrived.  I pulled up to E.B.’s office half an hour before my scheduled departure time to drive to the prospect’s office.

Central Expressway, highway I-75 in Dallas, Texas is a north-south artery through the heart of the city.  Despite being widened decades ago, it is still a parking lot at rush hour. 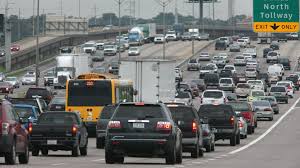 Dallas rush hour has never been any fun

Prior to this reconstructive doubling of lanes, Central Expressway only offered two lanes running north, and two lanes running south.  For the eighth largest city in the United States.  Even at midnight it wasn’t easy to be able to drive as fast as the 55 mph speed limit.

This event occured when Central only provided two lanes going north.  My appointment was north.

E.B. closed his passenger side door to my car and strapped himself into the seat belts.

I hit the gas and hammered it down like a Formula One driver all 23 miles from office door to office door.  We blasted up Central at 85 miles per hour when there was no way you could drive the 55 mph speed limit on that two lane outdated disaster.  Shoulders included.

When I parked at the prospect’s office, E.B. was breathless.

We arrived at my appointment on time.  It wasn’t a one call close, but the call went well, and led to eventual business later.

I drove the same way all the way back, from office door to office door.  E.B. couldn’t wait to get out of my car.  It was the last time he ever horned in on one of my sales calls.

When our new sales team grew to the point that a second sales manager was needed to help field our growth, Al was brought in.

Al had been Roy the Boy’s original hiring boss in a previous sales job, so I guess he felt obliged to help carry Al to this next step.

That’s what we told ourselves and each other.  There couldn’t be any other reason.  Al was just, a dufus.

He was a nice dufus, a well meaning dufus, but a dufus nontheless and far worse, one who thought he was a genius.

If you were hitting the bars, would you want Colonel Klink along as your wingman?

If you were making a serious sales call,would you want Colonel Klink along as your colleague?

Al and I mutually agreed upon a day for his ride-along to my sales calls.  I scheduled six meetings for the day.

In one selling day, we drove to sales calls in east Dallas, north Dallas, west Fort Worth, south Fort Worth, Addison and Arlington, Texas.  Al was gassed when I dropped him off at our offices in Arlington.

I still maintained some modicum of exercise regimen so I was in the better shape of the two of us.  I bucked it up and acted as if this was literally, just another day at the office.

That was the last time Al wanted to go out on sales calls with me.

What could either manager say?

“Workman overworked me”?  Gee, and that’s a bad thing, how?

My point is simply this:

There are Bosses, CEOs and sales managers who I would be proud to make a sales call with any day of the week.  They are competent professional businesspeople.

There are Bosses, CEOs and sales managers I wouldn’t take on a sales call with me if I needed the deal to win an annual contest.  They are hindrances.

I just gave you two ideas how to rid yourself of a nuisance if you happen to have one looming over the top of your Boof at work.

Never, ever, ever tell your immediate sales manager you have any kind of big deal possible to come in.

Sales Rep:  Boss!  Intergalactic Rainforest Technology said they’re coming on board this month – for the full boat!  Everything!

I think you get the point …

Please remember, I have a great deal of respect for sales managers.  To me, they are the second most important positions in the company, behind the CEO or Boss.  I was one.

And you know what I did when one of my reps came in and told me he had a big deal that told him they were imminent?

HAVE A GREAT DAY, TODAY!